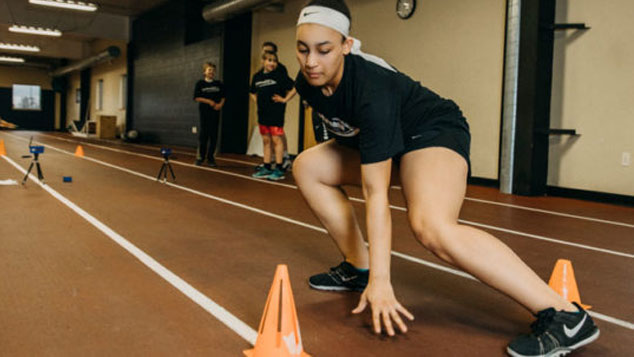 Key elements that apply to all sports are speed, agility, strength, power, and endurance. At Performance Sport & Speed, we train athletes in grades 4-12 in these areas. We then take their training to the next level with personalized, sport-specific workouts. Our coaches emphasize proper technique and incorporate injury prevention exercises, creating a powerful, functional athlete. Having trained over 3,000 athletes throughout the state of Iowa, we have developed a program that works to progress athletes to the next step in their careers, whether it’s high school athletics, college athletics, or professional athletics.

Performance Sport & Speed meets on Tuesday and Thursday from 4:30-5:30 pm. 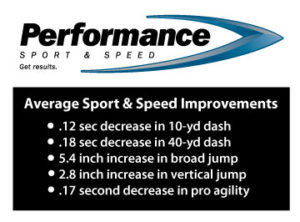 Hannah earned her B.S in Exercise and Sports Science in 2014 from UW- La Crosse and will be completing her M.S. in Kinesiology from A.T. Still University in December 2020, with a specialty in orthopedic rehabilitation and corrective exercise. She began with Performance as a personal trainer in 2014 before spending three years as the strength and conditioning supervisor at a large YMCA in northern New York, where she specialized in working with youth artistic gymnasts and other youth athletes between the ages of 2 and 18. Hannah is currently the strength and conditioning coach at City High, and her goal in working with youth athletes is to not only make them better athletes but also to provide them with the skills and knowledge they need to be active and healthy throughout their lives.

Brendon grew up in Iowa City. After writing his own programs in high school, he learned the technique of Olympic weightlifting under coach Jianping Ma as well as how to write strength programs under UNI’s head strength and conditioning coach Jed Smith. Brendon gained more experience working with the Waterloo Black Hawks as well as multiple teams at UNI. Brendon is currently at Iowa City West High School working as the strength and conditioning coach as well as working with the students in Performance PE. In his free time, Brendon enjoys music, relaxing with his family, and supporting his athletes whenever possible.

His passion is to develop relationships with athletes and give them the tools necessary to achieve success on and off the field.

Kelsey has always had a passion for sports and helping people grow up with an athletic background. She combined her passion at the University of Iowa where she graduated in 2016 with an Exercise Science degree. Since then she has gained experience through rehabilitation internships at hospitals, working with the University of Iowa football team and personal training. She enjoys working with clients of all ages, motivating and pushing them to new fitness limits while building relationships. In her free time, Kelsey loves spending time with friends and family, being outdoors, traveling, playing volleyball, and going to sporting events.

Bryan attended the University of Northern Iowa for undergraduate and his masters from 2008-2015. While there he was a member of the top 25th ranked Men’s Track and field team. After Track and Field Bryan got involved with Olympic Weightlifting with coach Jianping Ma, Coach Ma was a member of China’s first Olympic Weightlifting team at the Los Angeles Olympics in 1984. After learning from Coach Ma, Bryan began interning with the UNI Strength and Conditioning department working with Track and Field and Football. In 2015 Bryan began his masters and became the Head Strength and Conditioning coach for UNI Track and Field while also assisting with UNI Football. After finishing his masters, Bryan became the Sports Performance Director for Sioux City East. After 2.5 years at East Bryan returned to UNI to become the Head Strength and Conditioning coach for UNI Women’s Tennis while assisting with UNI Track and Field. Bryan joined Performance Health and Fitness in May of 2018.

Mitchell received his Bachelor’s degree in Human Performance and Fitness from St. Ambrose University in 2016. He has always been interested in sports and staying active. Since the age of 5, Mitchell has played tennis; his sport of choice. Mitchell enjoys working with people on the “little things” in the gym that can lead to BIG differences in performance and functionality. When he is not with clients or doing his own training, Mitchell enjoys being outside, fishing, and catching up with friends and family.

What exactly is injury prevention? We focus on teaching the athletes proper technique to help their overall athleticism. By developing athleticism, we cover all the positions and movements encountered during a practice or competition. We focus on bodyweight movements first, covering the basic mechanics of jumping, running, and landing so when the athletes encounter a similar position during a competition they already have the correct movement pattern to produce the maximal amount of force. To increase injury prevention we also focus on strength exercises throughout the full ranges of motion to help develop the muscles fully, as to not over shorten or overstress the muscles that are most commonly injured depending on the sport.

What about the young athlete’s ACLs? With knee injuries being fairly common, especially in adolescent girls, we make sure to teach the girls how to recruit the proper muscles during the movements that could put added stress on the ACL if done improperly. By teaching the athletes to recruit the proper muscles, we teach them how to move without added stress to the knee ligaments this helping prevent the ACL and other knee injuries. By teaching them in practice, we are able to have carried over into the games so they don’t get out of proper position and put their knees and ACLs at risk.

Sport-specific vs general athleticism? We focus on both of these during our sport and speed sessions. The general athleticism is what will help the athletes when they are reacting to a ball or a play during competition. We want all of our athletes to be well rounded and able to move well throughout normal sport-specific positions like throwing or hitting mechanics for baseball or softball, but also have the proper positions when they react to a ball hit to their left or when they have to jump to catch a line drive. Sport-specific exercises are those that can directly be transferred to the sport, such as box jumps for basketball players, med ball throws for baseball and footwork, and agility for soccer. All of these types of exercises would help further the athlete’s development in a specific sport.

Since joining Performance, I have made huge gains. The process of recovering from knee surgery has been much easier because of the expertise of the Performance staff in helping me get back to full strength. I would recommend this gym to anyone.*

“I joined Performance and it has changed my life. Gone are the days when I dreaded trying on clothes at the store, Thanks to Performance, I feel like a super fit mom.”*

Under the guidance of trainers, I have been able to decrease my 5K time from 28 minutes to under 20 minutes in just 2 years.  I have also lost 30 pounds while increasing strength, endurance and power.*

Training over the last few years at Performance has been the best health decision I have ever made.  Leslie, my current trainer, keeps me on track to stay fit and strong, makes our sessions interesting and challenging, and is always positive, even when I have setbacks.*

“I am a competitive cyclist and have been in personal training at Performance for 6 years. The best part about the trainers is that they know our medical histories very well.  Leslie is great at modifying a training session specifically to each individual person’s limitations so as to avoid injury.”*

“I’m retired and enjoy a full, active life. This is due, in no small part, to the time I spend at Performance. The group classes provide a great workout and lots of variety. Plus, a fun way to meet new friends!”*